At the Abbey, we ask Our Lady of Perpetual Help to intercede for us as we invoke her during our Collective Worship.

We ask Our Blessed Mother to take our prayers to her Son Jesus. We are proud to have a pictorial representation of her in our main corridor, made up of photos of the pupils.

We also have other prayers that the children say at school: 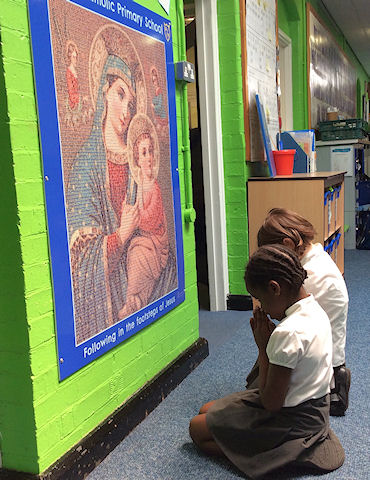 Praying to Our Lady

Each classroom has a class saint which the children pray to each day. The children ask their class saint to intercede for them each day at the end of prayers as they say “Saint <name>, pray for us.”

As a child, Our Blessed Mother appeared to Bernadette seventeen times and gave her a mission. Bernadette was asked to pray for sinners and build a chapel.

People did not believe that Our Lady had appeared to Bernadette and therefore she was locked away. Bernadette continued her journey in response to the mission that she was given, and set out to build a chapel. Bernadette found a spring of water which she used to heal people in the community, and as a result of her kind nature she became a nun.

Unfortunately, Bernadette died at a young age and we celebrate her feast day on April 16th.

Saint David is the Patron Saint of Wales. Saint David spent many years studying the bible, to then go on and become a priest. In South Wales, Saint David founded lots of churches. Saint David’s Cathedral is the largest Cathedral and was founded after his death. There are lots of stories of Saint David performing many different miracles. One of these miracles is the well-known story of Saint David raising the ground under him to form a hill.

March the 1st is the Feast day of Saint David. The leek and Daffodil are often worn on Saint David’s day by those celebrating as the symbol of Wales.

St Francis was born in Assisi, Italy in 1182. He grew up leading a privileged life as the son of a wealthy cloth merchant. As a boy, Francis loved to learn and sing songs. His father wanted him to become a businessman and taught him about the French culture. In 1202, Francis took part in a war, was taken prisoner and held for almost a year. Three years later, Francis planned to fight in another conflict but on his way there, he had a vision. In the vision, he was told to return to Assisi and wait for a call to a new kind of knighthood. He returned to Assisi and spent time alone and prayed.

Over the next few years, Francis had experiences that inspired him to give up all his possessions and to live in poverty. Francis began to preach and attracted followers or disciples. In 1209, he declared a simple rule for his disciples: to follow Jesus Christ and to act as Christ did.

Francis was known for his love of nature and animals. There are many stories about Saint Francis and his preaching to animals. It is said that one day he was talking to some birds when they began to sing together and then they flew into the sky and formed the sign of a cross.

St Hildegard of Bingen is considered to be patron saint of musicians and writers and she is a Doctor of the Catholic Church.  Her feast day is celebrated on 17th September.

Borin in Germany in 1098, Hildegard had mystical vision of God from a very young age. She kept her visions secret until later life when, as leader of a convent, she shared what she saw with others and began to write and draw these. She did all things with great faith and although she had no formal education, her teachings, musical compositions and her philosophy is still read and important to the life of the Church today. She teaches us to care for all of God’s creation as “Creation is the song of God”. A message that very important to us today. 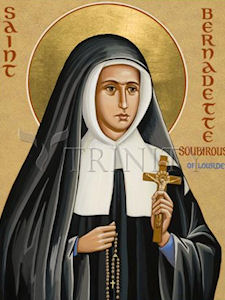 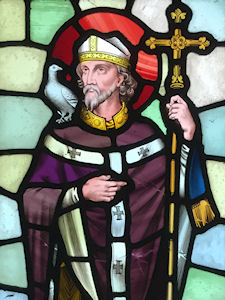 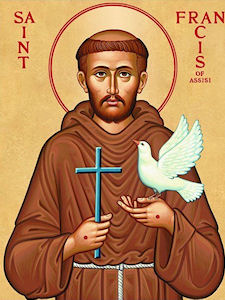 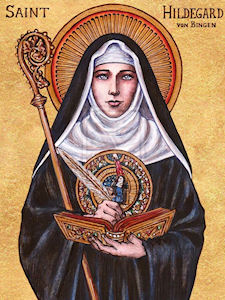 St Joan of Arc is the patron saint of France and soldiers. We celebrate her feast day on May 30th.

As a young girl, she heard voices she identified as St. Michael, St. Catherine and St. Margaret telling her to help the eldest son of King Charles, Charles VII, recover his kingdom from the British. Her mission was accomplished but Joan was captured by the King’s enemies, tried for witchcraft and heresy and burned at the stake.

Joan is considered a brave and bold hero in France and nicknamed ‘Maiden of Orleans’ for her renowned courage during the Hundred Years War.

Tekakwitha was the child of a Mohawk father and a Christianized Algonquin mother. At age four she was the only member of her family to survive smallpox, which affected her own health. Staying with her anti-Christian uncle, she was deeply impressed at age 11 by the lives and words of three visiting Jesuits, likely the first white Christians she had ever encountered.

She began to lead a life inspired by the example of those men, and at age 20 she was instructed in religion and baptized Catherine (rendered Kateri in Mohawk speech) by Jacques de Lamberville, Jesuit missionary to the Iroquois Indians. Upon her death witnesses said her face became more beautiful than ever and the scars completely disappeared!

Kateri was canonized October 21, 2012; her feast day is on July 14, she is the first North American Indian canonized as a saint in the Roman Catholic Church. Kateri is the patron saint of ecology and the environment due to her closeness with nature and understanding it as a supreme gift from God. It is also proposed that she be named patron saint of the Americas.

St. Lucy is the patron saint of the blind. We celebrate her feast day on 13th December.

As a young girl, St. Lucy’s mother was diagnosed with a long-term illness, she spent much of her time praying at the shrine of St. Agnes and her mother was cured. Her dedication to God was so strong that she refused to compromise her virtues for marriage. Even after being betrayed, her faith and courage remained, as she could not be moved with the force of 1000 men and 50 oxen pulling her. Unfortunately, a Roman guard hurt St. Lucy and she died but only after receiving the sacrament of anointing the sick.

After she had died, the Roman governor ordered for her eyes to be removed. However, her eyes were miraculously restored when they were preparing her for her burial, and this is why she is the patron saint of the blind.

Saint Martin faced great hardship in his childhood and was often mistreated due to the colour of his skin. As Martin grew he worked alongside a doctor to learn medicine. He spent hours of the night in prayer, a practice which increased as he grew older.

Under Peruvian law, descendants of Africans and Native Americans were barred from becoming full members of religious orders. The only route open to Martin was to clean and cook for the Brothers of the monastery, in return he would receive the privilege of wearing a habit and living within the religious community.

Martin continued to practice his old trades of barbering and healing and was said to have performed many miraculous cures. He also took on kitchen work, laundry, and cleaning. After eight years at Holy Rosary, he was finally accepted as a Dominican brother.

We celebrate his feast day on November 3rd and we remember him for his dedication to God and his power to perform miracles of healing. 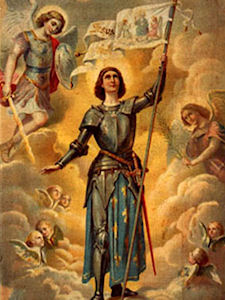 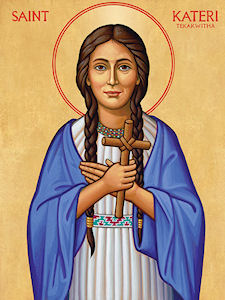 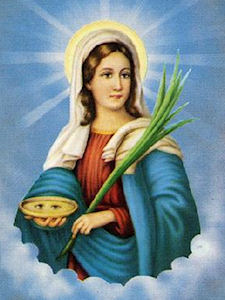 Maximilian Kolbe, formerly Rajmund Kolbe, was born in Zdunska Wola, Poland in 1894. He was a tricky child who disobeyed his parents, so his mother prayed to Mary for guidance. Maximilian had a vision where Mary offered him two crowns: red for martyrdom and white for purity. He chose both and dedicated his life to Mary following this. He trained to become a priest and began a radio station promoting the veneration of the Immaculate Virgin Mary.

In 1941, Maximilian was captured and taken to Auschwitz, the German death camp. Whilst there, the officers chose ten men at random to be starved to death. One man was distraught at the thought of his family hearing of his death, and upon hearing this, Maximilian offered to swap placed with the man. In their cell, Maximilian led the nine other men in prayer and reflection. He was the final surviving man, and eventually he was killed by lethal injection on 14th August, and this is when we celebrate his feast day.

St Michael is a very special saint as he is also an angel. As a result, he is often referred to as St Michael the Archangel and his feast day is celebrated on the 29th September.

St Michael is the only angel to be called an Archangel and is regarded as the leader of all angels. He is seen as a protector and led God’s army in the book of revelations to defeat evil. St Michael the Archangel is the patron saint of many things such as police officers, paramedics and the military which all require the qualities that Saint Michael possesses.

When depicted in art St Michael the Archangel is often shown with a sword, scales and vanquishing evil.

St Nicholas was a priest. He was a rich man, and travelled the country helping people, giving gifts of money and other presents. St Nicholas did not like to be seen when he gave away presents, so the children of the day were told to go to sleep quickly or he would not come! Nothing has changed and Santa Claus will not arrive this Christmas unless the children go to sleep early!

A famous story about St Nicholas, is about a poor man who had no money to give to his three daughters on their wedding day. St Nick dropped bags of gold into the stockings which the girls had left to dry by the fire.

Saint Valentine lived a long time ago when Claudius II was the ruler of Rome. Claudius II did not like Christians. He loved having lots of soldiers to fight in his wars!

Claudius II thought having soldiers for his wars was so important that he made a law that people couldn’t get married. Claudius II thought that if young boys got married and had families they would not want to go off and fight in his wars. This made things really tricky for the Christians following God. They knew that God wanted them to worship Him, not the false gods of Claudius II. They also knew that God wanted them to get married and start families.

Saint Valentine had the special job of being God’s helper during this time. He was a priest, so he would marry the men and women who wanted to get married. This is why he is called the patron saint of love and marriage. 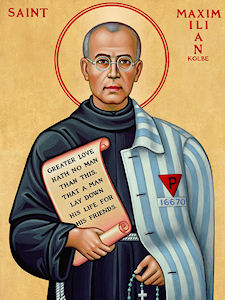 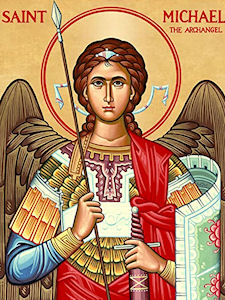 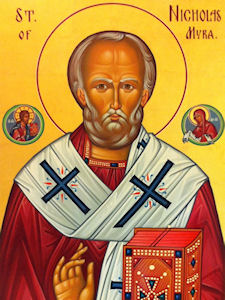 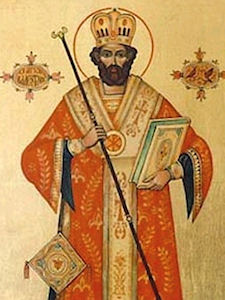